Title: A Quiet Kind of Thunder

Author: Sara Barnard
Summary: Steffi doesn’t talk, but she has so much to say.
Rhys can’t hear, but he can listen.
Their love isn’t a lightning strike, it’s the rumbling roll of thunder.

Steffi has been a selective mute for most of her life – she’s been silent for so long that she feels completely invisible. But Rhys, the new boy at school, sees her. He’s deaf, and her knowledge of basic sign language means that she’s assigned to look after him. To Rhys, it doesn’t matter that Steffi doesn’t talk, and as they find ways to communicate, Steffi finds that she does have a voice, and that she’s falling in love with the one person who makes her feel brave enough to use it.

I picked up my copy of this novel back in January when it was first released, I initially picked it up because I thought the cover was absolutely gorgeous – and if you have read my post Confessions of a Reader, well you will know that I do indeed judge a book by its cover. It’s a bad habit, ok. I just loved the combination of pink and gold, and thought it looked just too beautiful not to pick up.

It did take me almost 5 months to pick it up, and actually read it. But once I realised that Sara Barnard would be attending YALC later this year I thought now is the time to read it.

I went into the novel with no previous novel of the story itself other than the information on the blurb, so I went in with a clear mind.

After the first few pages I began to worry a little that this novel would be like so many other pieces of YA literature in the sense that, boy meets girl, they fall in love and all of the problems that either of them have faced are instantly gone because “love cures all”. But I am so goddamn pleased that it didn’t fall into the trope, of that “love can cure a cure all”, because it’s problematic and untrue. I am speaking through personal experience here. Barnard has clearly researched the topics very well, and has even gone as far as calling out the problematic tropes surrounding mental health, disability and racism.

‘I don’t want a boy to be the reason I get better, what would that say about me if it is?’

And then I fell in love with both Stefi, and Rhys almost instantaneously. And it’s not often that I feel such a strong connection that soon into a novel. Both characters were lovable together, and alone. Their relationship was beautiful too, and it was something that I loved to watch blossom. It was great to see a lead male character show real emotion and worry, it’s something that is not often portrayed well in YA literature, although there are more and more authors tackling issues like that. He was also a sweet guy without the whole young love cliche. I fell in love with Stefi too, and Sara Barnard’s portrayal of Stefi’s anxiety was well done. It was truthful and true. I felt everything that Stefi was feeling and more. Barnard’s way of writing is just bloody lovely, and it really helped me to connect with Stefi and Rhys, and even Tem. 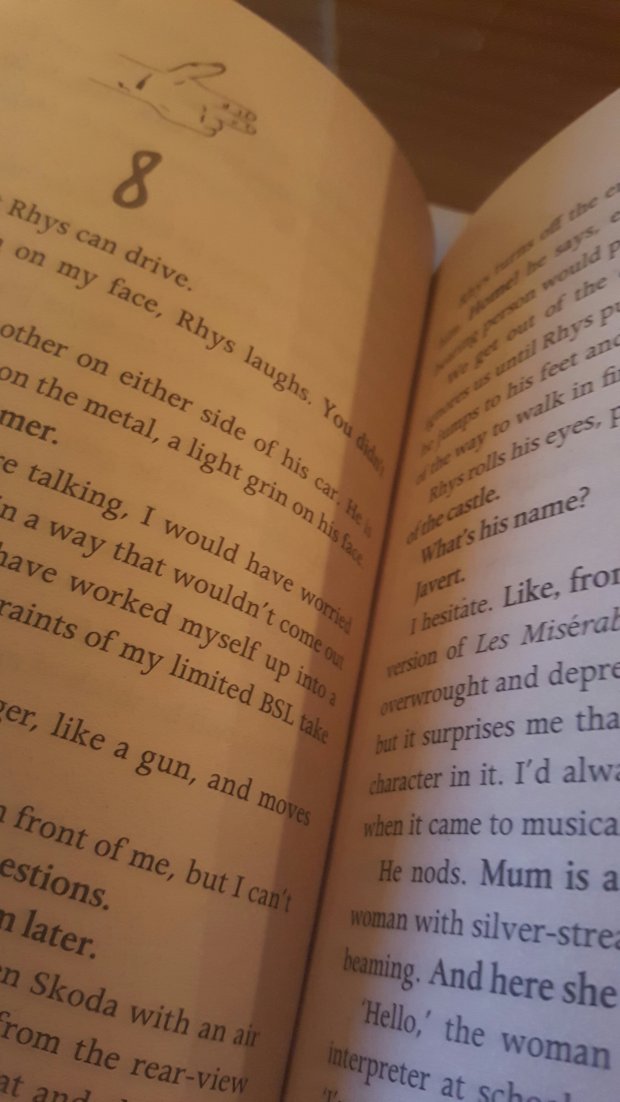 Stefis best friend, Tem is the daughter of a refugee, and plays an active roll throughout the novel. As Stefi’s best friend she has been there through it all with her, from being toddlers right up until sixth form where Tem chooses to go to college without her best friend. Tem is also a POC, and Barnard chooses to include an example of racism within the novel which not only shows the difficulties faced by Tem, but it also reflects on how Stefi’s selective mutism has affected her life through by not being able to stand up for herself or others in situations like those highlighted.

“Panic attacks are a lot like being drunk in some ways, you lose self-control. You cry for seemingly no reason. You deal with the hangover long into the next day.”

I read through this book in just two sittings, as it is an easy read with the use of lists, IM’s, text messages and British Sign Language which I thought was a brilliant touch. Not only am I being entertained by the story itself, I am also learning some BSL. And I believe that really adds to the story. I think the use of IM’s and text messages, as well as the mention of Facebook helps too, as it reminds the reader that this book’s main characters are teenagers, and it is set in the 21st century. In turn, this also makes it more relateable. I know I’ve been there, being sent a friend request from someone you barely know but what to get to know better. You can almost feel the nerves and excitement that Stefi feels too.

Overall, I bloody loved this book. It made me feel so many emotions, all at once. I was happy, and excited, nervous and scared. I honestly felt like a teenager again. I was on this journey with Stefi and Rhys, and Sara Barnard captures the journey perfectly.

Have you read A Quiet Kind of Thunder, what were you thought’s on the novel?

I am a 22 year old student nurse, and book lover.